On the first turn the first player must draw only 3 cards instead of 5. On the first turn the second player must draw only 4 cards instead of 5.
In battlefield mode the game is structured like a showdown between two parties on a battlefield. After having chosen their characters players must choose a battle position. Each team should sit together with two players at the sides as the frontline and a skirmisher in the middle who will protect his teammates by casting spells (generally the magic character takes this place). Each player who is on the frontline can only attack the opponent who he has in front of him and vice versa. Only when the frontline is broken can attacks be used against the Skirmisher in the back line. The Skirmisher can use weapons and monsters against either of his opponents’ frontline attackers and can also defend his comrades and gain experience by killing any monsters which are attacking them. This is the only game mode where monsters follow the same attack restrictions as weapons, meaning that monsters can only be used against frontline players (when allowed). Every player can cast spells (when allowed) against anyone on the battlefield. The game ends when the first Skirmisher falls. A team wins when they have eliminated the opponent’s Skirmisher. 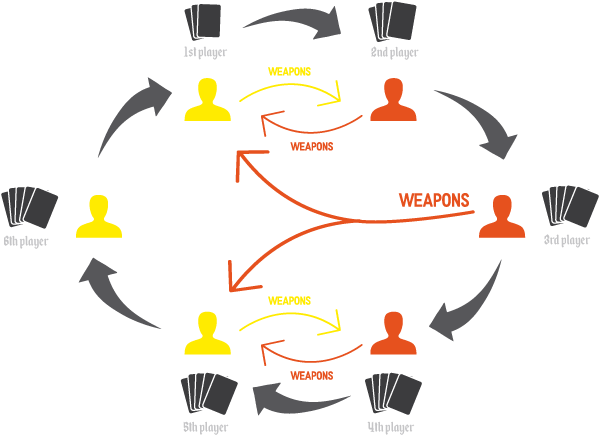