Monster cards are all cards with a red frame. Just like other cards, a Monster card is placed into the discard pile when purchased.

Monsters can be played in front of any player, and not just the owner.

symbol, and you can track their Life Points using a counter card provided or a die.

Monsters block a player’s access to the Market: if you have a Monster card in front of your Hero, you cannot buy cards nor play cards related to the Market (e.g. ‘Smelt Gold’).

Furthermore, at the beginning of your turn you will be attacked by each Monster in front of your Hero.

Monsters function just like non-Heavy weapons, with the owner of the Monster rolling a die separately for each Monster, applying the +/- bonus on the bottom left corner of each Monster card.

If the defending player has any Defence cards, the attacking player decides how to distribute this damage before rolling the die, just like a normal attack
If a player is unlucky enough to have Monsters in front of him from multiple owners, he decides the order of activating owners. 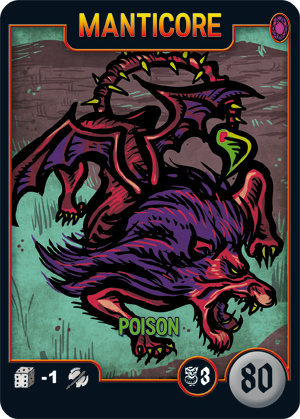 By playing Weapon cards or attack Spells from your hand you can attack the Monsters in play.

You are forced to defeat all Monsters in front of your Hero before attacking another player or Monster.

If you are attacking Monsters, roll a die to see how much damage will be inflicted: damage is equal to the roll of the die, modified by any +/- bonuses next to the

A Monster is killed when it has no Life Points remaining, with wounds carrying over between turns: keep track of each Monster’s remaining Life Points by using a counter card provided or a die.

If you have multiple Monsters in front of your Hero, choose the order they will be damaged before rolling the die.

If a Monster card is reduced to 0 Life Points it is killed and discarded to its owner’s discard pile, and the remaining damage is carried over to the next Monster in the same area.

Any remaining damage after having defeated all Monsters in the same area is lost (except damage done by Heavy weapons.

When you kill a Monster, you gain its Market price in Experience Points (XP).

If you attack a Monster, any secondary effect which targets your opponent is always applied to the player to your left (or otherwise to your opponent in a 5-6player game).