Some Adventure cards have secondary effects, indicated with text on each card, which will take effect at the beginning of each player's turn untill the end of the encounter.

Meaning, for example, that for each turn the Adventure card #18 stays in play the current player discards two chosen cards at beginning of their turn. 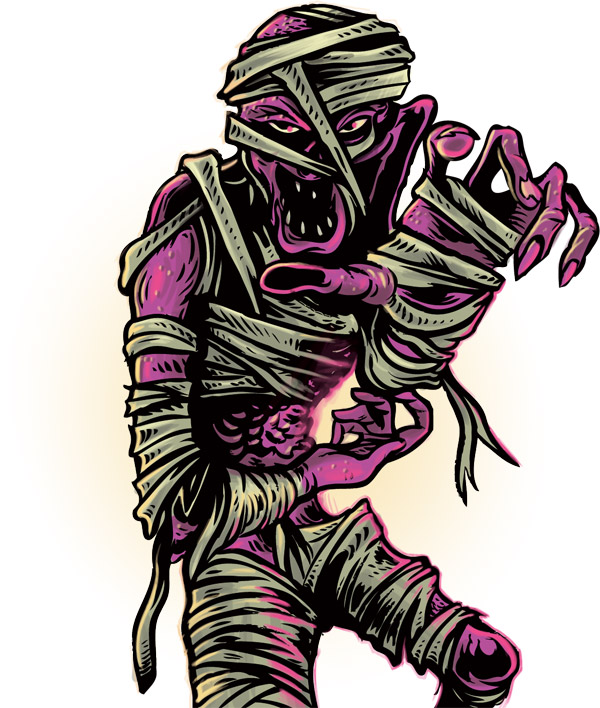 Roll a die for each Monster in your area. In the case of more than one attacking Monster, follow the attack order from the strongest attack

value to the weakest.

value to the highest.
Player chooses in case of a tie. If a Defence card suffers damage equal to the value next to the

icon, it is discarded and the remaining damage is carried over to the next Defence card.
Any remaining damage will not affect the Hero’s Life Points (except damage inflicted by Monsters with Heavy attack!).

Spiked Shield: If attacked by a non-ranged Weapon this shield deals 1 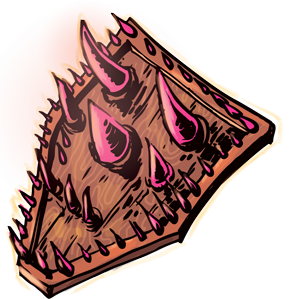 A player is defeated when his Hero is reduced to 0 Life Points. Any remaining damage from all attacking Monsters in that player’s area is not carried over to other players.
Only in this new co-op mode, all cards in that player’s hand and all items in their inventory are placed in front of the defeated Hero character board. During their turn, any other player still alive, who as no Monster in front of them, can buy these cards by playing Money cards from their hand and collect mini cards by putting the items in their own inventory.

If there are no surviving Heroes, read the Dead section of the current mission in the Adventure Book. The party size remains the same until the end of the adventure even when a Hero is defeated.

As in the base game, by playing Weapon cards from their hand players can attack other Monsters in play.
A Monster placed in front of any other player can be attacked only if there are no Monsters in front of the attacking player.
Inflicting damage rules are the same as in the base game: any number of Weapons can be played during a player’s turn, however in this Co-op mode, the player is always forced to attack a Monster in play if able to.
If there are multiple Monsters in a single area, attacking player chooses the order damage will be inflicted before rolling the die.
If a Monster is killed the remaining damage is carried over to the next Monster in the same area.
Any remaining damage after having defeated all Monsters in a single area is lost (except damage done by Heavy Weapons

and Spells, which can be carried over to Monsters in a second area but not a third).

Punch mini card: In this new co-op mode whoever joins the fray will be equipped with a new Weapon... their own punch!
Punch mini card always stays close to the Character board. Once per turn players can choose to use Punch.
They cannot use punch in the same turn as other Weapons or attack Spells.
The attack is 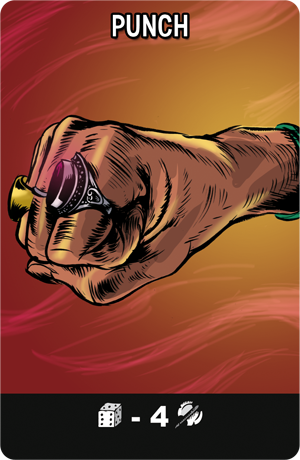 Loot cards remain in play until the end of the encounter and are discarded before drawing a new Adventure card, but until then, players can buy Loot cards by playing Money cards from their hand, as in the base game.
If a player has a Monster card in front of them, they cannot buy loot cards.
A player can also buy loot cards placed in other players’ area, unless there is a Monster in that player’s area.

In this co-op mode during an adventure players are not able to sell items.

Damage inflicted by Spells function like using a Heavy Weapon: damage is carried over to the next Monster in the same area and any remaining damage is carried over to Monsters in a second area. Attacking player must declare, before attacking, the order of damage infliction. Any remaining damage after having defeated all Monsters in two different areas is lost. As in the base game, healing Spells can only be used on that player’s Hero, unless otherwise indicated.

Defeated Monsters may leave items for the killer or other effects listed on the back of that Monster’s mini card.
These cards from now on will be called “Loot cards”.
Draw the cards indicated on the back of the Monster mini card and place them face up, in the area where the Monster was killed.
A player can also decide not to loot enemy corpses by not turning over one or more mini cards drawing the items lying under their bodies.
Any loot card dropped by a defeated Monster must be drawn from their deck, as follows: 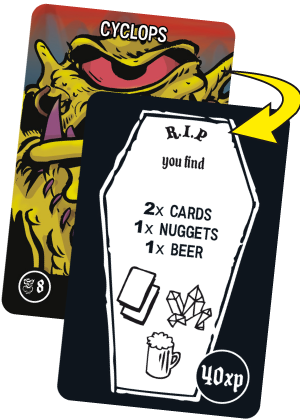 icon is present on the back of the card, a roll will determine the loot cards.

When instructed to draw cards /

draw the indicated number of cards corrisponding to your party size, always round up.

When a Hero defeats a Monster they also gain the experience points (XP) specified in the lower-right corner of the back of the mini card, if present.
When a Monster found on a standard card is killed, the Hero who kills them gains the experience points indicated on that exact card. No loot cards will be drawn after killing a Monster found on a standard card unless otherwise instructed by the adventure special rules. 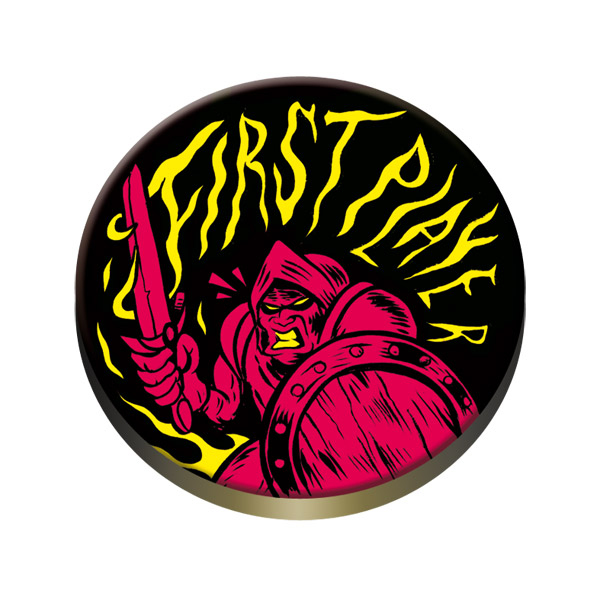 From this moment on, starting from the First Player and moving clockwise, each player has up to one turn to buy any loot card still in play, cure wounds and get prepared for the next encounter.
During these turns players can purchase loot cards and play any card except Weapons and Spell attacks.
If every other player has played their turn in this phase, the First Player has at their disposal a second turn to buy loot cards already in play or play other cards before drawing the next Adventure card.

If you have defeated the last Monster take the First Player token, becoming the First Player.
You can buy any Loot cards in play during this turn.
Then you can choose one of the following actions:

Pass the turn allowing the other players to take theirs.
Weapon and attack Spell cards cannot be played when there are no monsters in play.
If all players -after the last Monster has been killed- have taken a turn and the game returns to you, draw the next Adventure card at any time during your turn.

Continue the adventure and draw the next Adventure card at any time during your turn.

After the last Monster has ben defeated by the First Player, each other player can take one turn and purchase any Loot cards in play.
Weapon and attack Spell cards, when there are no monsters in play, cannot be played.
Then they you can choose one of the following actions:

Continue the adventure and draw the next Adventure card at any time during your turn.

Draw the next Adventure card

Drawing a new Adventure card means discarding all (unpurchased) loot cards still in play.
If needed a player may discard all unused cards from their hand and finish their turn allowing following teammates to buy cards still in play.
However, during their turn anyone who wants to become the First Player may take the token, place it in front of their Hero and then draw the next card from the Adventure deck, forcing all other party members to keep pace with them.

• Gain the experience points (XP) of the encounter just ended (if any).
• Remove the cards of any defeated Monsters.
• Discard any loot cards still in play. When you discard a card put it on the bottom of that card’s deck.
• Remove all summoned Monsters and discard all magic Defences in play (e.g. Stone Wall). 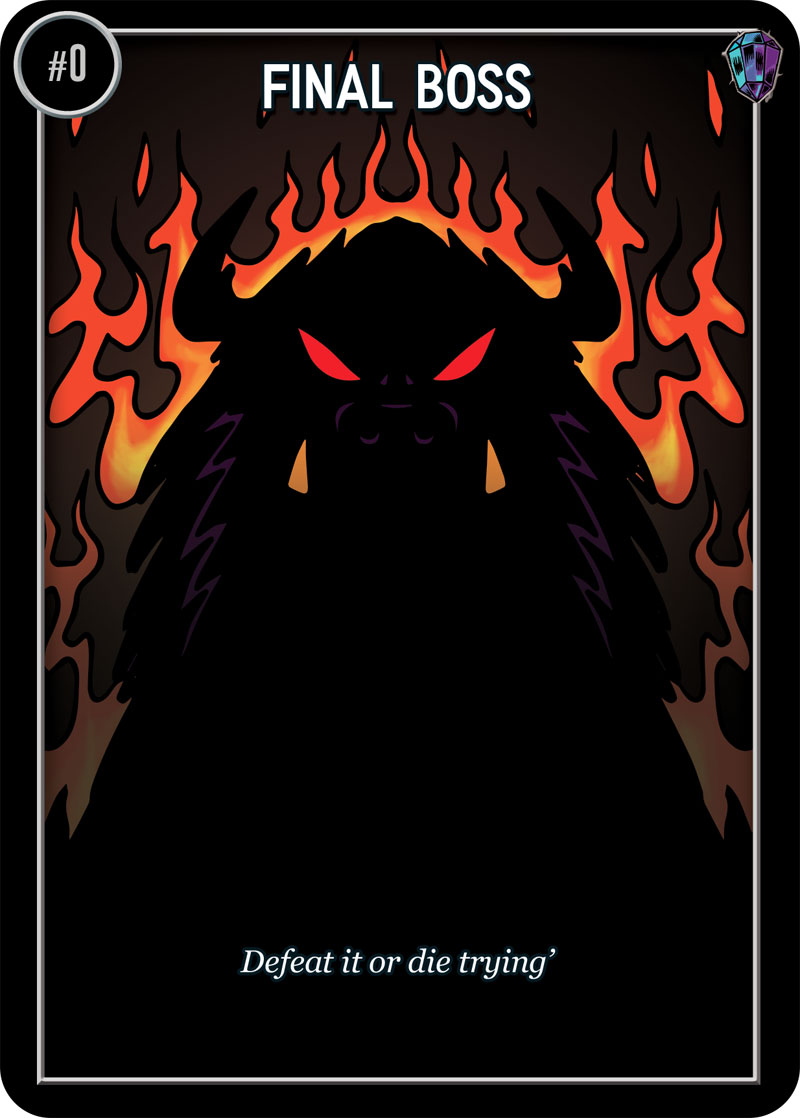 When the Adventure card #0 is present it is always placed on the bottom of the Adventure deck unless specifically otherwise indicated.
Final boss is normally the last encounter of a mission and it is unique to each adventure. Its characteristics are written in the Adventure Book after any ‘Special rules’ .
Read the rules related to the Final Boss only when the Adventure card #0 has been drawn. Play the Final Boss in an area separate from any other player’s area. If attacking player has Monster in front of them, remaining damage is not carried over to the Final Boss Monster (except damage done by Heavy Weapons and Spells).
After its defeat, player who kills the Final Boss gets immediately the First Player token becoming the First Player. Starting from the First player and moving clockwise, each player has at their disposal up to one turn to buy any loot card still in play and cure wounds.
If every other player has played their turn in this phase, the First Player has at their disposal a second turn to buy loot cards already in play or play other cards before the conclusion of the current adventure.

Conclusion of an adventure

When all the Adventure cards have been drawn (including #0 “Final Boss” when present) the Heroes have completed the adventure. Following the instructions of the Adventure book Heroes gain rewards or useful items.

When there are no Heroes alive the party is defeated and players will be bounced to a chapter indicated by the current mission on the basis of the progress achieved by the party.
The Adventure Book will show you how to manage cards and progress. If at least one Hero remains alive and survives the adventure, refer to section “Alive”.

If at least one Hero remains alive and survives the adventure the party will complete the quest and unlock its secrets.
Shuffle the Main deck and each deck on the Market board. Discard your hand and all your cards in play and your discard pile back into your deck.
Any defeated Hero who has not been brought to life in time is removed from the game with all their remaining cards and that player must reset their Hero Sheet.
That player chooses a new Hero (preferably a different one) and they will join the party before continuing to read the next chapter, after the bonuses gathered by the Final Boss, if any.
Each new Hero starts with a deck of 10 cards: 8 coin cards and 2 Staff cards.

The adventure which is painted for the future of your Hero will take a long time, for this reason it will not be possible to end it in one go.
Players can pause the game at any time, however the smoothest way to end a play session is to do it just after the Pack your Bag phase.
Each player can write down the cards, items and skills they gathered throughout the journey and make a note of the progress they have made on the Hero Sheet provided, so that it wil be easy to resume the game.

You can save your Heroes and their progress with our handy online app! Click here to access your saved Heroes (you need to be registered on the site).