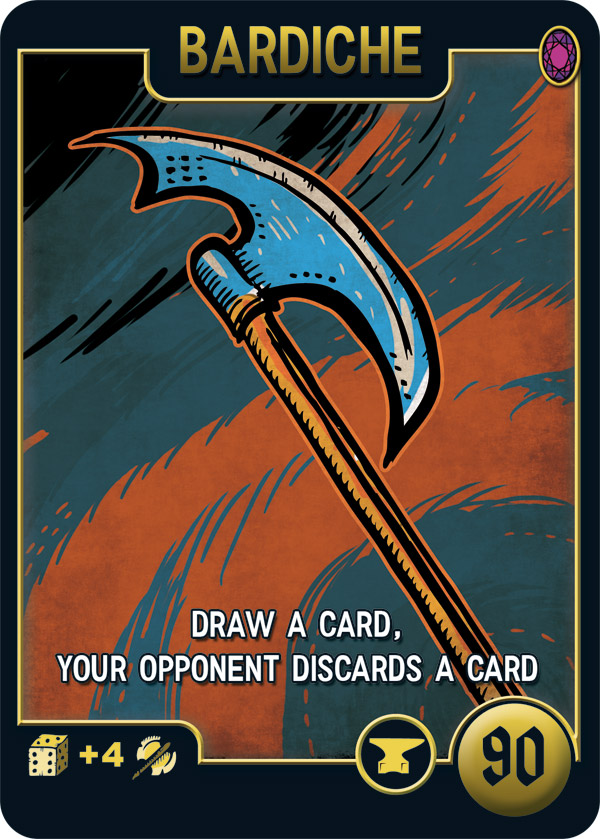 If you don't have access to the Market during your turn (by having a Monster in front of your Hero) then any Market effects are ignored (e.g. Remove a card from the market).

Draw a card from your deck.

If your deck runs out, shuffle your discard pile to create a new deck, then continue drawing.

If you play a card with the “Draw a card” secondary effect with no more cards to draw and no cards in your discard pile, this effect is ignored.

It is useful to remove cards in order to optimize your deck and make it more efficient.

Some cards force you or other players to discard cards.
The card to be discarded is chosen by their owner, unless stated otherwise, and are placed face up into their owner’s discard pile.
In a game with 3-6 players, effects which make your opponent to discard cards, always target the player to your left, regardless of the target of the attack.

Example: If playing a card with the “Discard a card” secondary effect on a Monster, the player on the left (or otherwise his opponent in a 3-6 player game) always discards, even if the monster/s are not his.

This item can help any class of Hero to avoid unlucky hands.
It is a useful item for anyone who uses heavy Weapons and isn’t discarded at the end of the turn.
Place Sheath in front of your Hero character board. At any point during your turn, if there are no Weapon on top of this card, you can sheath up to one Weapon card from your hand for use in any later turn.
Place that Weapon on top of Sheath card. When you want to play that Weapon discard Sheath .
Discard any sheathed Weapon at the end of each adventure.